When we think of food poisoning and product recalls, were are normally thinking of a bacteria or virus capable of making a consumer sick. This was the case with the recent ice cream recalls in which listeria was found in many of the ice cream products shipped to stores across the county.   We also saw one recent case where the maker of children’s applesauce recalled its product, because safety inspectors discovered mold growing in some of their production units. However, in that case, it should be noted that the mold was allegedly not harmful to humans, but was considered a problem nonetheless, which is why the company voluntarily recalled their applesauce packets. 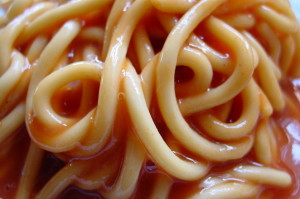 However, biological contamination is not the only problem that could cause a food product to be recalled. According to a recent news feature from Fortune, Campbell’s is recalled around 355,000 cans of SpagehettiOs due to safety concerns. In this case it is not a foodborne illness that is causing problems, but rather the discovery of what the company is calling a potential choking hazard, as there have been pieces of red plastic in some cans.

The company says the plastic is from parts of the can lining that can peel away. These products were produced in 14.2-ounce metal cans and are dated February 22, 2017. Campbell’s warns that food in these cans should not be eaten and instead should be returned to the store for a full refund.

While this may seem like an area of law that is not heavily litigated, there have been a lot of cases on products liability involving potentially dangerous objects in food items, and some of the most important cases in the United States were decided in the Commonwealth of Massachusetts. One famous case involved a man who ordered fish chowder at a famous Massachusetts restaurant. The man was eating his fish chowder when he swallowed a fish bone. The bone caused him serious pain and suffering, as it pierced his mouth and esophagus, and he needed immediate medical attention and significant follow up care. The case was tried and eventually appealed to the Supreme Judicial Court (SJC) for the Commonwealth of Massachusetts. Since this case took place in a restaurant, there was a lot of discussion about whether the restaurant was performing a service in selling him food, or if the sale of the soup was not a service but a sale of goods.

This is relevant, because, as our Boston products liability attorneys know, there are different laws and remedies for injures caused by a defective product and injuries caused by negligent performance of a service obligation.

In the case of the fish chowder, the issue for court came down to whether one would expect to find a bone in chowder or not. The court actually held that Massachusetts fish chowder is so well-loved because of its freshness, and the bone was part of that. One who eats the chowder should expect that bones might end in the final product. One the other hand, one would not expect to find pieces of red plastic in his or her pasta sauce.