Many people have seen the recent advertising campaign for Xifaxan, which features what can only be described as an anthropomorphic intestine with a happy face as part of their new commercials.   This is similar to Lunesta using a magical butterfly.  Now the makers of Pradaxa using animated red goldfish to sell their drug. 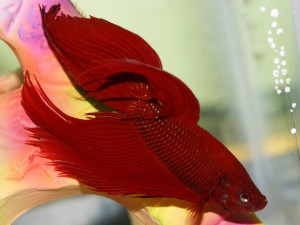 Now, recent news feature from BioPharmaDive, discusses how the United States Food and Drug Administration (FDA), is beginning to look into whether this may lead potential drug users into not taking risks seriously because they are being presented with a lovable cartoon character when being told about the risks.

This is of course in addition to the fact that they have a very soothing voice describing serious and possibly deadly medical conditions in way that almost makes them sound like good things.

In the Pradaxa commercial for example, these red fish are seen traveling through a clear stream and are meant to represent the flow of blood in a patient with a clotting disorder.  One of the major target groups for the makers of Pradaxa are patients who suffer from a serious medical condition known as atrial fibrillation (Afib).  This is medical condition in which the patient has a problem clotting caused by an irregular heartbeat not associated with a heart value defect.

These patients will form blood clots if they are not medicated, and these clots can cause serious illness and death.  If the clots form in the legs, they are known as deep vein thrombosis (DVT).  These DVT clots are formed deep in the veins of the legs and can break loose and travel though the patient’s bloodstream until they reach the lungs.  This can cause a  hemorrhage known as a pulmonary embolism (PE), which can result in serious injury or death. The clots can also block the flow of blood to the brain causing a stroke.

These patients are most likely on Warfarin (Coumadin), which is a traditional blood thinning medication. Warfarin has been proven effective and used for many years, but it is not the easiest medication for patients to take because the dosage has to measured carefully and frequently by having the patient take routine blood tests. If the dosage is off, the patient could suffer a serious bleeding disorder, but there is an antidote.  Patients also have to watch what they eat because certain foods like kale contain a lot of potassium, and this can affect the absorption rate of the drug.

The makers of Pradaxa say they they have a one size fits all dosage that does not require constant monitoring.  The problem is that some patient will suffer a serious bleeding disorder, and some have died as a result of this bleeding disorder. They do not know why these patients suffered a serious Pradaxa injury, and they do not know what warning signs there are, if any exist.

There is a new a reversal agent, but it was only recently put on the market.  As discussed in the article, a patient is seeing lovable cartoon fish and being told about dangerous and deadly bleeding conditions in a very soothing voice is raising eyebrows at the FDA.

If you are a victim Pradaxa and live in Massachusetts, call Jeffrey Glassman Injury Lawyers for a free and confidential appointment — (617) 777-7777.